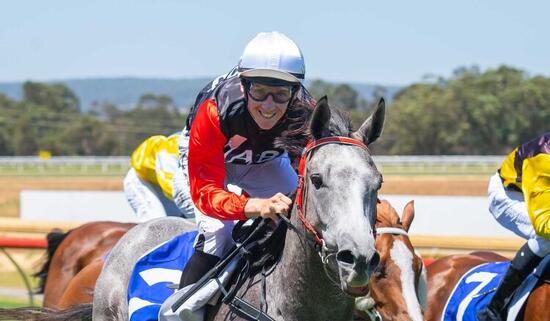 On Thursday we Take the highly talented but wayward Cash Away to the races. He has been passed at trials after playing up in the barriers last start and having to trial to the satisfaction of the stewards.

His Trial was Sensational! Clint keep him wide on the track and although it was only a small winning margin, it was a very impressive trial just coasting the whole way with Clint not fully extending him.

Unfortunately Clint has been suspended and we have had to put a new rider on him. The inform apprentice Holly Watson will ride and claim 1.5kgs which will help. Drawn perfectly in barrier 7 he should be able to sit off the speed and come with his great turn of foot and take a power of beating! We hope he is on his best behavior in the barriers. Go Dave!

Songs And Lyrics is first up and it is looking like he won't get a run in our proffered race on Thursday and will have to run on Wednesday at Belmont Park over 1000m. He is working terriffic and goes well fresh we are expecting a big run from him with Holly Watson in the saddle he should roll forward to be in the first 4 and take some getting past. Go Bear!